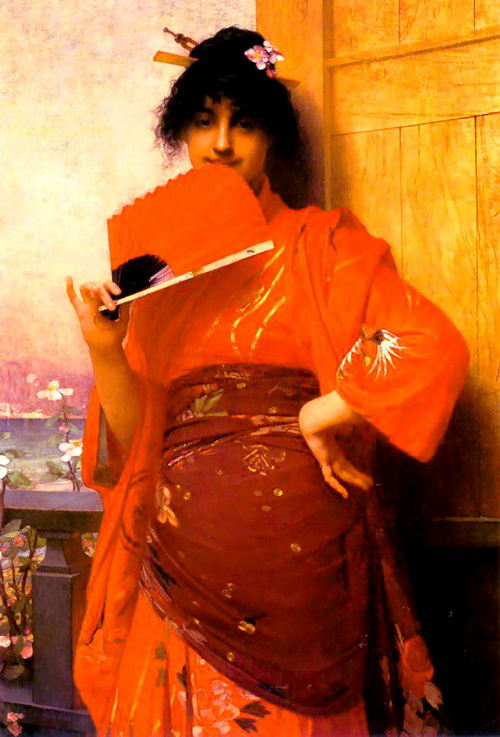 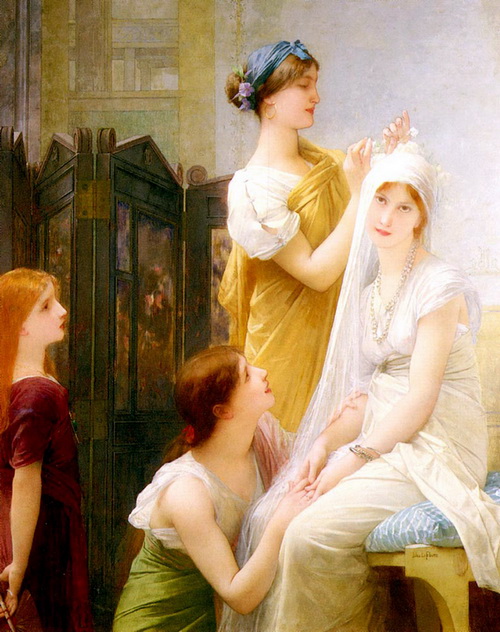 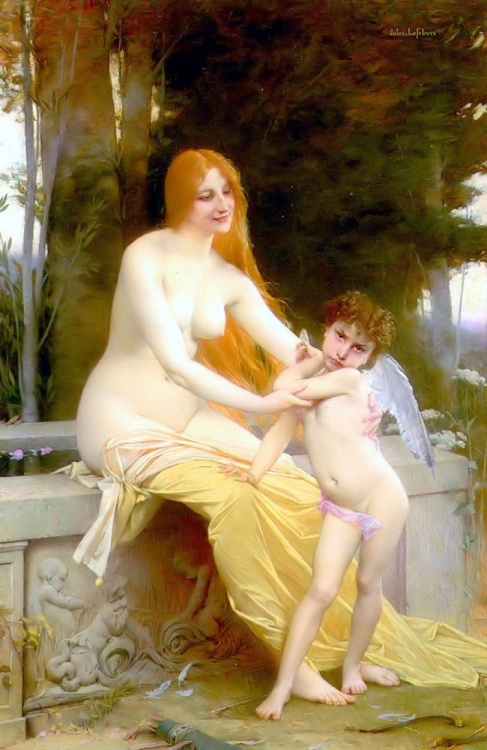 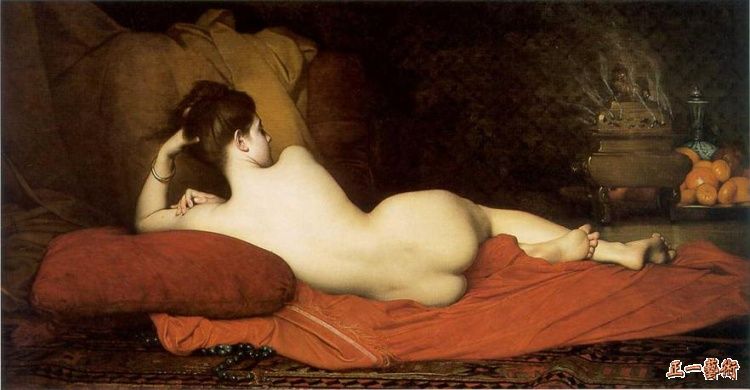 12、弹曼陀林的女孩 Girl with a Mandolin 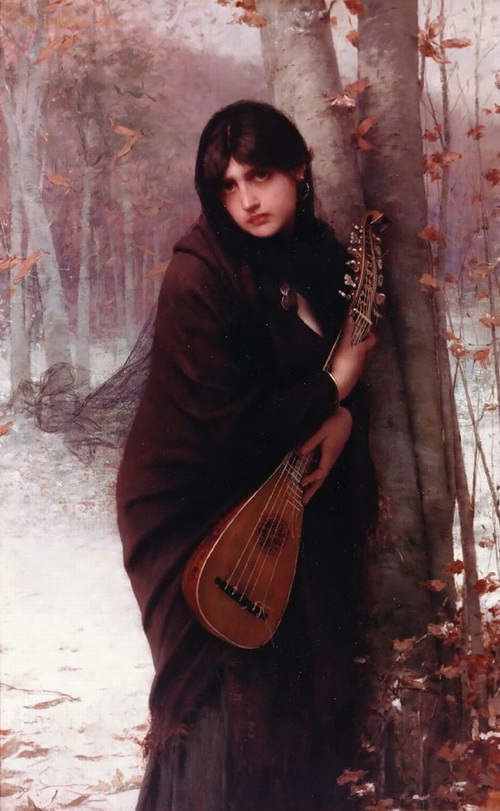 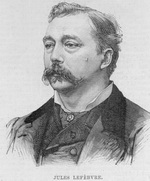 朱尔斯・约瑟夫・勒菲弗尔 Jules Joseph Lefebvre (1834-1912年)。A reviewer at the 1881 Paris Salon wrote the following about Jules-Joseph Lefèbvre: “It is sufficient to just mention his name in order to immediately evoke the memory and the image of the thousand adorable creatures of which he is the father.... Jules Lefèbvre, better than anyone else caresses, with a brush both delicate and sure, the undulating contour of the feminine form.”[1] Like a typical academic artist, Lefèbvre started his career with the traditional subject matter of histories and other narratives. It would not be till later in his career that he would focus exclusively on the human figure in portraiture and especially the female nude, with great ability and success. Lefèbvre was born on March 14th, 1836. Though his father was only a baker, he nonetheless encouraged his son to pursue painting, sending him to study in Paris in 1852. There, Lefèbvre became a pupil of Léon Cogniet and a year later started attending the école des Beaux Arts. His debut at the Paris Salon was in 1855. He then spent the next few years pursuing the coveted Prix de Rome (the main competition for young painters, which would win him five years of study in Rome and a reputation that would all but guarantee a successful career). In 1859 he came close, placing second. Two years later the history painting The Death of Priam would win him first place. It would be during his stay in Rome that he would find his individual artistic niche. Able to study the great Italian masters, Lefèbvre was fascinated by the Mannerist painters, especially Andrea del Sarto. He copied his work avidly and demonstrated Andrea’s influence in his painting Boy Painting a Tragic Mask (1863)[2]. It was also during this time that his interest in the female nude began, painting his first in 1863. Among other works he did in Rome, he sent the narrative Roman Charity to the salon of 1864 and painted Cornelia, Mother of the Gracchi in 1866. The latter narrative, however, was ill received by experts, arousing overwhelming criticism. That same year his parents and one of his sisters died. These negative events in both his personal and professional life sent him into severe depression.[2] He emerged from his depression and came back to Paris with a different approach to art and a change of interest in subject matter. He apparently became disenchanted with the traditional formulaic approach to painting, instead turning towards more precise rendering from life.[2] In 1868 he exhibited a Reclining Nude at the Salon, which unlike his last significant work, won him much praise.[2] Two years later, his allegory of Truth became his first great success.[1] A beautiful young woman holds up a mirror (the conventional symbol of truth). This symbol, though, is at the very top of the painting, so, in order to get to it one’s eye has to caress the sensuous feminine curves over the length of the outstretched figure. Shortly after the success of this nude, he was made an officer in the Legion of Honor. What followed in the decades to come were variations on Truth. His many beautiful nudes took the roles of Mary Magdalene (1876), Pandora (1877), Diana (1879), Psyche (1883), and Aurora among others. His nudes became so famous that his only rival was considered to be Bouguereau. Unlike Bouguereau’s figures though, Lefébvre used a greater variety of models, which can be seen in his work. It is not surprising then that he exhibited seventy-two portraits at the Paris Salon from 1855 to 1898. Most, of course, are of women. Among those who sat for him include his daughter Yvonne, the Imperial Prince in 1874, and the novelist Alexandre Dumas (1869), who also seems to have admired his nudes, purchasing a Femme Nue in 1892. In the 1870’s he became a teacher at the Academie Julien (an atelier that trained women artists as well as men over a decade before they were also permitted into L’école des Beaux Arts). There he is said to have insisted to his students on absolute precision in life draw.